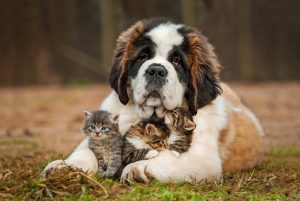 Reactions to thunderstorms and loud noises such as firecrackers are not uncommon. While many dogs get accustomed to storms, others may become more sensitive, resulting in additional fear with each exposure. Even a single frightening event during a storm may contribute to fear of thunderstorms. The degree of anxiety is based on a dog’s perception of a threat, the dog's genetic tendency to be a nervous dog, and early socialization period exposure, along with how we as pet owners dealt with a nervous puppy. When a dog’s response to thunderstorms is extreme, it is considered a phobia. Often this phobia worsens with age, so it is important to address your pet's storm fears as early as possible. Don't take thunderstorm phobia lightly, even if the problem seems minor in your dog. Handled badly by humans, it will get worse, and dogs have been known to jump through glass windows during storms. Some dogs will throw up when it storms. Many dogs have fled fenced yards. This is a major problem that calls for intelligent handling at the first sign. Treat storms as a routine part of life, nothing to fear, and even perhaps occasion for some special times. Do these things before your dog ever shows signs of phobia, and perhaps you'll never experience a serious case

Dogs may show a variety of anxiety signs during or before a thunderstorm: panting, trembling, hiding, pacing, vocalizing, and being destructive. Diagnosis is clear when the signs occur consistently during a storm. However, some dogs are more anxious during thunderstorms when they are alone, and thunderstorm and noise fears are common in dogs with separation anxiety. We have had owners describe mild signs such as hiding, or what we call "velcro" dog, when the dog sticks to your legs, to extreme fears when the dog tries digging out of the house or crate or even through glass windows.

Dogs react to a variety of things associated with storms, and it helps to know what these are for your dog. You may never know them all, but at least a general understanding will help you understand the extent of this fear. 1) The loud noise is scary to some dogs, and the dog can hear it at a much greater distance than humans can. The dog has early audio warning of an approaching storm, and most storm-phobic dogs eventually start reacting long before the sounds are loud. 2) Electricity in the air may be a major factor in dog storm phobia. Is there something unpleasant about this to the dog's sensations? Does it perhaps become even scarier to a dog who has been trained with an electronic collar, or frightened by a static shock in everyday life? 3) The smell of the air changes when a storm approaches, and of course the keen nose of a dog detects this early. 4) The air pressure changes, too, and a dog's ears are more sensitive to pressure changes than most people. In some cases, it might hurt. 5) The family may change routine when a storm is approaching. If the family is fearful, gets irritable with the dog, or treats the dog in some unpleasant manner during this time (puts the dog outside, for example), that could feed the dog's fear. By being aware of the early signs your dog exhibits before the storm can help you to be prepared and even help you decrease some of your pet's anxiety, by redirecting his behavior before his anxiety escalates.

How can you help your dog? If you are fearful of storms, take action to ease your own anxiety. Your pet can and does sense your fear about storms. Play some soothing music, have some fun time with your dog by playing tug or ball in the house, thus taking your mind off the storm and at the same time your dog is having fun and is distracted from the noise associated with storms. The important thing is to take your mind and your dog's mind off of the storm by being involved in a fun activity. Make storms occasion for special times with your dog to create positive associations. Games, treats and special activities are time well spent during storms. Be upbeat and not impatient or pitying your dog with your touch or your voice. Using soothing touches or a soft, reassuring voice during his fearful behavior is rewarding his fear. Dogs feel "rewarded" for fearful behavior if you pet and praise when the dog is behaving fearfully. Rewarding a behavior increases the likelihood of that behavior occurring more often, even when the individual is not conscious of being rewarded for it. The dog will pick up on your emotions and body language, so make them confident by being confident and working on obedience skills or teaching him something you would rather him do instead of being velcro. Give rewards when the dog is behaving confidently, calmly, or happily. Work with your dog a few times every week on developing good obedience skills and fun tricks when it is not storming, such as a down-stay, find it games, tug, fetching games, targeting skills that can later be used to teach other skills such as closing doors. Working on developing these new skills will so that you can practice them during storms and then reward him. This is powerful training that will help you and your dog in all aspects of life.
For Mild to Moderate Cases: Beyond the above tactics, you may want to try some of these:

Thundershirt: an anti-anxiety swaddling coat that aids in reducing stress.
Zylkene dietary additive: offers natural coping/calming effects.
Adaptil diffuser, spray or collars: a pheromone that aids in reduction of stress
Your veterinarian may prescribe your pet rapidly acting panic medications such as Alprazolam or Diazepam that can be given just before the storm.

For the More Severe Cases

For the dogs that have extreme fear, it will be important to reduce the anxiety during a storm to prevent worsening of the anxiety and allow management and treatment option to be successful. It is critical that you be aware of your dog's triggers and begin taking preventative steps before the storm arrives. For example, using the Adaptil diffusers and collars just before storm season begins and continue using them until the storm season passes. If the weather man says rain Wednesday, put the dog's Thundershirt on Monday. You may also try:

1. A quiet, dark, sheltered refuge. Your dog may find the preferred spot independently, leaving you to simply make sure it stays consistently available to the dog. Chosen places dogs include basements, bathrooms (sometimes in the bathtub), closets, and crates that are kept in secluded parts of houses.

2. If your dog becomes frantic and as a result might suffer injury or do damage during a storm, you may need to develop a good means of confining the dog. Sometimes a secluded crate works, if the dog has been conditioned to rest calmly in a crate.

4. You and your veterinarian or veterinary behavior specialist may decide to medicate your dog with an anti-anxiety drug for the entire storm season or year-round (these medications generally do not work until the dog has been on them for weeks), or a sedative during storms. Due to the unpredictability of storms, it may not be possible to administer a sedative when it's needed. Dogs with severe anxiety may benefit from long-term management with anxiolytic medications such as Clomicalm or Reconcile, plus rapidly-acting anxiolytics, Alprazolam, that may be given immediately prior to or even during a storm.

6. A behavior specialist can help you work out a behavior modification program to work on this problem. Such a program might include a tape of storm sound effects and training for your dog that you can use when the fears start. Learning more about communicating with your dog and modifying dog behavior in positive ways is always time well spent.

If your dog has storm issues contact your veterinarian for a behavioral consult. Team work and communication is the key to your dog's happiness.