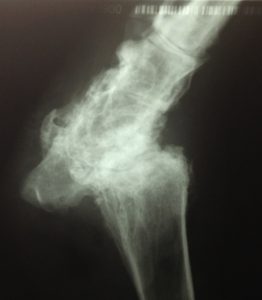 Osteosarcoma (OSA) is a rapidly growing, destructive neoplasm of bone that accounts for 80% of all malignant bone tumors in dogs. Neoplasms of the skeleton are more common in dogs than in any other species. Primary bone tumors such as OSA are five times more common than metastatic skeletal neoplasms, and malignant tumors are more common than benign neoplasms. Osteosarcoma is most common in giant and large breed dogs (90%) and is uncommon in small and medium breeds. Breeds especially predisposed to development of OSA include Saint Bernards, Rottweilers, Great Danes, Golden Retrievers, Irish setters, Doberman Pinschers, and Labrador retrievers. The mean age of occurrence is 7-1/2 years and incidence of OSA is slightly more common in males than females.

Ionizing radiation, chemical carcinogens, foreign bodies (including metal implants, such as internal fixators, bullets, and bone transplants), and pre-existing skeletal abnormalities such as sites of healed fractures contribute to the development of OSA. In addition, there have been correlations with genetic predisposition to tumor development in certain family lines. Dogs with OSA have been found to have aberrations of the p53 tumor suppressor gene. In Dolly's case, when she was young, had had a fracture in this joint.

The most common clinical signs of OSA involving the appendicular skeleton are lameness, swelling, and pain. The considerable soft tissue swelling is predominantly due to edema and reactive fibroplasia caused by impaired circulation in the subcutaneous and intramuscular tissue proximal and distal to the tumor.

Lymph Node enlargement occasionally can be observed in sites distal to the tumor. Lung metastases may be associated with the development of hypertrophic osteopathy where space occupying lesions of the lung incite subperiosteal formation of new bone. Lymph nodes draining the neoplastic site may become enlarged and firm following tumor metastasis.

Treatment of OSA can include surgery, chemotherapy, and radiation therapy. Survival without treatment is ~ 2-6 months.10 Amputation is palliative but rarely increases survival time. Chemotherapy administered after amputation helps to control metastatic disease and may increase survival time significantly. The most successful chemotherapy protocol is a combination of cisplatin and doxorubicin that is administered following amputation.

Prognosis for OSA is variable, and depends on how advanced the cancer is when first diagnosed, if it has already moved to the lungs and lymph nodes, and whether there is extension of the cancer into soft tissue (which Dolly had).

If you note a persistent limp or swelling in your large breed pet contact your veterinarian. The earlier the diagnosis, the more success there is for treatment with amputation and chemotherapy.