Housetraining For At Home Parents 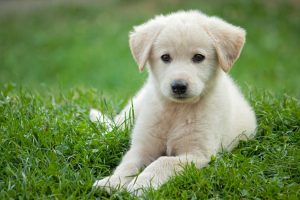 You have been acclimating your new puppy to his 'room' aka crate. You have him sleeping in his room at night and taking his naps in his room. You use his crate for when you cannot keep a vigilant eye on the pup. Eight week old pups can be crated for up to two hours during the day and through the entire night when they are sleeping. So how do you get him to go outside to potty?

First thing in the morning, when you let your pup out of it's crate (and before you have your morning coffee), take your pup directly outside, even carry him out because he could stop suddenly and urinate before you could make it to the door. You could attach his leash to his collar and let him run after you and outdoors. This can serve several purposes; leash training and also by leashing you can keep the puppy moving and not let it stop to take a potty in the house.

Take the pup to it's potty spot (aka his bathroom). This will be where you want him to go everytime you go outside. Visiting the same spot helps signal your dog with odors what to do in this given space so that he can be successful! Helpful hint here is to be sure to pick a spot that you will be happy with later as the pup becomes older. I had a client that because of cold weather would take her pup just outside the door, later as the dog was older this was still it's favorite spot and not as desirable to her owner. Once outside, keep her on a leash so that she can't wander about and get distracted, after all we are out here on a mission! Stand quietly until he potties and when he does praise him or give him a treat. Don't walk around, this will encourage your pup to take it's time about the business at hand and we want him to learn that his job is potty and not play. If after 5 minutes the pup does not potty, take her back into the house, put her in her crate for about 15 minutes(you can get dressed and make coffee while you wait) and try again. Continue this routine everytime you take the dog out and until your pup accomplishes its mission. When you can reliably predict your pup is going to potty, you can add a cue word. Say "go potty" or whatever cue word you want to use (keep it simple and everyone has to use the same word), within a few seconds before she postures to potty. If your timing is good and you are consistent, your dog will learn that 'go potty' means to do just that.

Now for the rest of your day. You are going to maintain constant supervision of your pup. In general, puppies will need to go outside to the bathroom the same number of hours as their age in months; 2 months old...every 2 hours. Puppies need to go out after a nap or first coming out of their crate, after a play session, and about 10-20 minutes after they eat and drink. Because I cannot stand in one spot and wait for my pup to need to go outside, I use the umbilical cord method, where I attached my pup to my belt or waist with it's leash. The leash should be about 6-8' long in order to give your pup a little wiggle room. Umbilical cord attached my pup is also less likely to get into other trouble, like chewing shoes! When I was sitting in my front room watching t.v. at night, I would run the loop of the leash around my foot so that my pup could play at my feet, but could run off where I couldn't see her. At my feet I could also reward her for sitting or lying down quietly. If the umbilical cord was inconvenient and sometime it was, I use child/pet gates to block off the room I was in so I could still keep an eye on her with having her right under my feet. Another useful tool was a playpen with papers on the floor under the pen. Make sure your pup has plenty of toys to keep her entertained and something to chew on to occupy her.

In addition to taking her out every 2 hours (longer if older) and after sleeping, eating and drinking, watch your pup's body language that says she is searching for a spot to pee. Signs can be very subtle, but typically they start sniffing the ground, circling or wander off. I have had pups that did not give very good body language, so I taught a signal to my pup. A bell on a string tied to the door! Everytime we went to the door to exit for the outside, I would put a treat near the bell, luring the puppy to the bell and ring the bell and give her the treat, then we would go out. Soon he is bound to jiggle the bell with his paw or his nose, at which point immediately reward him by taking him outside. He will quickly get the idea that the ringing of the bell equals going outside and he will begin ringing the bell on his own!

In the evening, I recommend no water within 2 hours of bedtime. At night our baby sleeps in it's kennel until morning. If she wakes up in the night barking, wait a few seconds until she is quiet before letting her out to go outside to the bathroom. Opening the crate while she is barking will teach her that barking get her released from the crate. At this stage, you will not be able to tell if her barking is because she has to 'go' or just wants out to play, so don't ignore her barking. If she doesn't go, then back the kennel we go until later.

In the morning, the processes starts all over. If you can do this for a month, your puppy will have an established habit. Remember the puppy doesn't understand that pottying in the house is wrong, any more than an infant does with wetting their diaper. Don't schold the pup for your mistake. If your pup has a wreck, calmly clean it up and figure out where you went wrong. Was she unsupervised? Did you miss her cues? Was she wandering freely? Too long in the crate? Then try again.