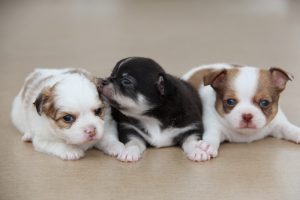 Crate training is a really wonderful tool for you and your puppy. You will gain great rewards throughout your dog's life by teaching your puppy to be comfortable in its kennel. The kennel/crate will become his bedroom. It will be a haven where he can get away from energetic children and company. It is a place where he can rest and be left alone. It is the easiest way to control your pup's environment and extremely helpful during housetraining. It is a place where your pup can stay safe when you are otherwise busy and cannot keep a watchful eye on your pup. Occasionally, I will get an owner that worries that by putting their pup in a kennel it is like a 'prison'. It's a prison only when the pup is never allowed out of the crate. Your own home could be a prison if you were never allowed to leave it. Dog's by nature are den animals. A crate is an artificial den for your dog and provides him a place of his own for peace and quiet.

Your dog may adjust more easily to stays at the veterinary hospital or boarding kennel when he can take his own personal, portable bedroom with him. If he travels with you, many hotels are more likely to allow a dog in your room if you tell them that he will be crated (and he is quiet in his crate). Most dogs love their kennels and enter them willingly when asked or when they want to have some time out away from his family. I will find my dogs in their kennels sometimes when they are sick and not feeling well, a subtle hint to me that something is wrong.

A few important things to remember: 1) Never use the crate as punishment 2) Children should not bother the pup/dog when he is in his kennel (house/den) 3) Never let your puppy out of the crate when he is barking or crying (If you do, you have allowed the puppy to learn that when he barks or whines you will let him out...he has trained you!)

Your pup's kennel should be just large enough for him to stand up and turn around and lie down in. So that you don't have to buy multiple kennels to fit your pup as he grows, I would suggest purchasing a crate that he will use as an adult and block off the back portion of it to accommodate his current size. Give him some nice bedding to make it comfortable and inviting. Don't spend a lot of money on bedding in the beginning as some pups may chew on bedding, old towels or blankets will due in the beginning.

Your pup's age can be used to determine how long he can stay in his crate before needing to relieve himself. This rule is true whether asleep or awake. Using your pup's age in months and adding (1) will give you an estimated time in hours that he can be kept in the crate before needing to go to the bathroom. For example, a 2 month old pup should not be left in his crate for more than 4 hours. This rule hold until the pup is about 6 months old, when he can be left in his crate for 6-8 hours (while you are at work) before he will need to eliminate. It is not appropriate to leave any dog in a crate for longer than 10 hours a day. If you are having to work longer than 10 hours, I suggest a day care provider for your pup. Your pup needs and deserves exercise, play, socialization, training time and time to interact with his new family. A crate is a training tool and should be used as such until the puppy understands all the rules in his new home. As he gets older, unsupervised time alone outside of his crate should be increased gradually.

A very important thing to remember is to never let your puppy out of the crate when he is barking or crying. If you do, you have allowed the puppy to TRAIN YOU!. If the puppy has been in his crate for a while and starts to bark, he may need to go outside to the bathroom. Wait a few seconds until he stops barking or whining and then quickly open the door and take him to the designated bathroom area. Immediately mark and reward him for eliminating in the right place.

Begin crate training by setting the crate in a room where the family is usually present. Place a dog bed or blanket/towels inside the crate. Leave the door open for a few hours and give him time to check it out. Entice him to explore the crate by throwing treats or toys inside so that he can retrieve it and then still come out. As he enters the crate give him the verbal command "kennel", or any other word you prefer (I have used 'load up') and use a positive happy tone of voice. Remember this is fun! Praise him for his actions. You may want to leave the door off of the crate during these times so that it doesn't accidentally close on him and frighten him. Practice this throughout the day, when you are free to work with him. Make it a game and fun. By using food/treats when working with the crate, he will associate the crate with good things. If it is time for your pup's meal, place the food bowl inside the carrier and allow him to eat his dinner in it. Supervise the meal, after he eats, he will likely need to go to the bathroom.

After your pup seems content and at ease in going in and out of the crate it is time to entice him into the crate with a treat and shut the door. Close the door for only a few seconds and then let him out (before he whines or shows anxiousness). Praise and treat him for his braveness. Repeat this exercise several times in a row and gradually increase the time between closing the door and letting him out. The goal is to increase the time so that he will rest comfortably in his crate for at least 30 minutes without making a fuss. Remember, if he fusses, do not let him out while he is fussing, wait a few seconds until he is quiet and then release him with praise. You are praising his being quiet. If he does not quiet down, rap on the top of the crate and say "Quiet" in a firm voice and the second he is quiet, then release and praise.

The nice thing about the crate is that it is portable. So you can move it to whatever room you will be spending time in at that particular moment. This way you can continue to practice having your pup go in and out of the crate. Example: cooking dinner? take the crate with you, door open, throw in a treat, say 'kennel' pup gets it and comes out and gets praised with pats and pets. Throw the treat in, say 'kennel' and shut the door for a few seconds to minutes. Letting out only when he is quiet. Praise and pet on release. Pretty soon, when you say 'kennel' he will run inside and wait for that treat.

Once your pup is getting in the kennel when you ask and waiting for his treat, and will stay inside for at least 30 minutes with no fuss, then I start to vary the treating, sometimes treating and sometimes not, and begin expecting him to be able to stay in his kennel for longer periods of time (2-4 hours). When you are leaving him in the kennel for extended periods of time you might want to reward his entering the kennel by giving him his favorite toy, or a nice kong filled with treats or a rawhide bone, something to occupy his mind and teeth while he is hanging out in there.

Most puppies love their crates. However, some will make it difficult for you. Under those circumstances, it is better to find another means of confining them. Other options are a utility room, a bathroom, an baby playpen, or baby gates in the doorway of a small room. I have used these options for a variety of reasons, often in circumstances where I cannot be present to let the puppy out to go to the bathroom if he needs to. In these cases, I have used a bathroom (puppy proofed of course) and lined the floor with newspaper (teaching him that he can 'go' on the paper) and will still leave the crate in the room (door off or tied open) so he can go to his crate to sleep and rest.

Crate training has many rewards, including being able to leave your puppy alone without any damage to your belongings, or accidents on the floor from improper elimination. This will speed up the housetraining process and provide your puppy with his own secure and comfortable bedroom while managing his environment.

If you are having trouble with teaching your pup to accept the crate, please feel free to contact Dr. Gray at drgray@animalcarefs.com or stop by and talk with our veterinary staff.