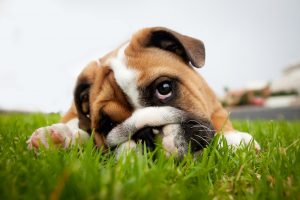 Your dog does something(s) that you wish he wouldn’t; pull on the leash, jump on you and people, etc. In order to teach your dog not to do the things that irritate you, we first need to learn how your dog learned to do them in the first place.

We know that dogs repeat behaviors if there is some form of reinforcement/reward in doing them. We can say the same things for humans. There has to be something in it for them/us. The reward(s) can come in many forms; direct and indirect, positive and negative, functional (something that fulfills a need or want) Sometimes our own actions or lack of them can be rewarding your dog’s actions. For example, a dog that pulls on a leash and we keep moving forward allowing a tight leash or pull and tug him back (keeping a tight leash), the dog is learning that in order to go forward (his functional reward) he has to pull. His pulling is rewarded by our continued forward movement.

In order to stop your dog from doing something you do not like it will be your job to remove the reward for the problem behavior and to give the dog something to do instead and reward the desired behavior. The reward for the desired behavior must be greater or equal to the reward they receive for the problem behavior. Here I encourage you to stop focusing on the negative behavior (jumping up on people) and start thinking about what reward your dog is receiving from the undesired behavior; what are they earning from the people, or the world around them by doing the behavior. Additionally you need to think more positively on what you would rather your dog do instead. Example: your dog jumps up on people, because he wants attention and we have rewarded him by petting him when he jumps on us. I would rather my dog sit quietly beside me and wait for his attention, so I do not reinforce his jumping on me and I wait for him to be quiet, ask him to sit and reward him when he does.

In summary, in order to stop your dog from doing something you dislike you need to make a game plan and implement the plan by:


The information on this page is the foundation that will help you become a great dog trainer, a responsible pet owner and for your dog to learn exactly what you wish him to do. Next, visit our other training web pages to get more helpful information on how to teach your dog good social and obedience skills and help him learn to be a prized member of your household.