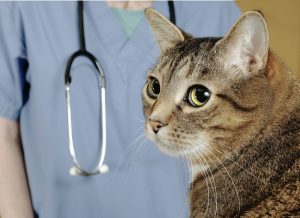 The Feline Immunodeficiency Virus (FIV) is also called the Feline AIDS Virus. It is similar to the retrovirus that causes FeLV in cats, and causes similar symptoms, particularly suppression of the immune system. It is also similar to the human AIDS virus, and is sometimes referred to as cat AIDS. There is no evidence that people can get AIDS from a cat that has FIV.

FIV preferentially infects white blood cells, which are an essential part of a cat's immune system. The virus disables or destroys the white cells and, leaves its host susceptible to infections. Once a cat is infected with FIV it is infected for life and can transmit the virus if it bites another cat.

How Do Cats Get FIV?
The FIV is transmitted primarily by the biting that occurs in cat fights. Most cats become infected with FIV when they are bitten while fighting with an infected cat. The virus, present in the saliva of infected cats, passes beneath the skin of the victim when it is bitten. Once it is in the body, FIV infects cells, replicates, and spreads to new sites via blood vessels and lymph channels. Most FIV-positive cats have a history of cat fights and bite-wound abscesses. Considering that bites are the primary mode of transmission, it is not surprising that cats at greatest risk of FIV infection are outdoor, adult males, who are most likely to engage in aggressive fights over territory.

A less common route of FIV transmission is from an infected mother cat (queen) to her kittens. Infection can occur in the uterus during pregnancy, through ingestion of virus-laden milk after birth or possibly as the kitten is delivered.

Not all kittens born to FIV-positive cats become infected with the virus. The reasons for this are not well understood although it appears that several factors may be involved, such as the strain of FIV and the health status of the mother cat. One FIV-positive queen might have a litter with no infected kittens. In some cases, litters may include some kittens with FIV and some without. This is an area of active research, and there are still more questions than answers.

Cats can also become infected with FIV if they receive FIV-positive blood or blood components in transfusions. However, the risk from blood transfusions has lessened considerable since reliable FIV diagnostic tests have become widely available. Today blood donor cats should be routinely screened for infectious agents.

FIV is rarely spread through casual contact (by sharing food and water bowls or litter pans, by airborne germs, or by mutual grooming). However, extremely sensitive, sophisticated tests have detected FIV proteins in some previously uninfected cats that had been living with positive cats for long periods. These "hidden" infections presumably occurred even though the cats did not fight. Although the affected cats had FIV proteins in their bodies, they did not test positive for FIV infection using routine blood tests and so far have not developed clinical signs of FIV infection. Therefore, the full implications of these observations are still unclear. However, casual FIV transmission must be considered a possibility.

Evidence of exposure to the FIV can be detected by a simple blood test. A positive test means the cat has been exposed to the virus and will likely be infected for the remainder of its life. A negative may mean that the cat has not been exposed; however, false negatives occur in two situations:

1. From the time of initial virus inoculation into the cat, it may take up to two years for the test to turn positive. Therefore, for up to two years, the test may be negative even though the virus is present in the cat.

2. When some cats become terminally ill with FIV, the test may again turn negative. This occurs because antibodies (immune proteins) produced against the virus become attached and bound to the large amount of virus present. Since the test detects antibodies that are free in circulation, the test may be falsely negative. This is not the normal occurrence, but it does happen to some cats.

What Does a Positive FIV Test Result Mean in a Kitten?
The vast majority of kittens under four months of age who test positive have not been exposed to the virus. Instead, the test is detecting the immunity (antibodies) that were passed from the mother to the kitten. These antibodies may persist until the kitten is about six months old, when the kitten should be retested. If the result remains positive, the possibility of true infection is much greater. If the kitten tests negative, there is nothing to worry about.

If a kitten is bitten by an FIV infected cat, it can develop a true infection. However, the test will usually not turn positive for many months. If a mother cat is infected with the FIV at the time she is pregnant or nursing, she can pass large quantities of the virus to her kittens. This means of transmission may result in a positive test result in just a few weeks.

What Type of Disease Does FIV Cause?
An FIV infected cat will generally go through a prolonged period of viral dormancy before it becomes ill. This incubation period may last as long as six years. Thus, we generally do not diagnosis an FIV sick cat at an early age.

When illness occurs, we usually see a variety of severe chronic illnesses. The most common illness is a severe infection affecting the gums. Abscesses from fight wounds that should heal within a week or two may remain active for several months. Respiratory infections may linger for weeks. The cat may lose weight and go through periods of not eating well; the hair coat may become unkempt. The cat may have episodes of treatment-resistant diarrhea. Ultimately, widespread organ failure occurs, and the cat dies.

Stages
FIV has three clinical stages. The initial acute stage occurs approximately four to six weeks after infection. It may manifest as, but is not limited to, a fever, swollen lymph nodes, a low white cell count or any combination of the above. Most cats survive this phase without treatment. The second phase is a period of relative normalcy lasting months to years. The third stage of the infection results from a progressive destruction of the white blood cells and dysfunction of the immune system.

A variety of clinical syndromes may develop, waxing and waning for years or months until the cat succumbs. The most frequent finding is a chronic oral infection of the gums, cheeks or tongue. Cats may also acquire upper respiratory, eye, ear, or skin infections. Some cats may also show vague signs such as lethargy, fever, diarrhea, poor hair coat; weight loss or inappetence and a small percentage may develop cancer. Diseases of internal organs like the liver, kidney, brain, lung, GI tract, and eyes are also associated with FIV due to its immunosuppressive nature.

If the test comes back negative there is minimal chance a cat has FIV. Since it takes 2-3 months for antibodies to show up in the bloodstream once a cat gets infected by a bite wound, theoretically it is possible that this is going on when a cat is tested negative. In the later stages of the disease when cats are showing severe symptoms the test can be negative. This is because the immune system is so depleted at this point that it can not make adequate antibodies to fight of the disease, hence there are none circulating in the bloodstream for the test to detect.

Is There a Treatment or a Vaccine for FIV?
There is no treatment that will rid the cat of the FIV. Sometimes, the disease state can be treated and the cat experiences a period of recovery and relatively good health. This can be promoted by use of proper nutrition and supplementation with immune system enhancers. However, the virus will still be in the cat and may become active at a later date. Therefore, the long-term prognosis is not good.

If you have a cat that tests FIV-positive but is not ill, it is not necessary to euthanize it immediately. As long as it does not fight with your other cats or those of your neighbors, transmission is not likely to occur. However, if it is prone to fight or if another cat often instigates fights with it, transmission is likely. In fairness to your neighbors, it is generally recommended to restrict a FIV-positive cat to your house. Owners of infected cats must be responsible so that the likelihood of transmission to someone else's cat is minimized.

There is a vaccine available for FIV. It is a three shots series to be taken 2-3 weeks apart. There is some question about the effectiveness of the vaccine however.